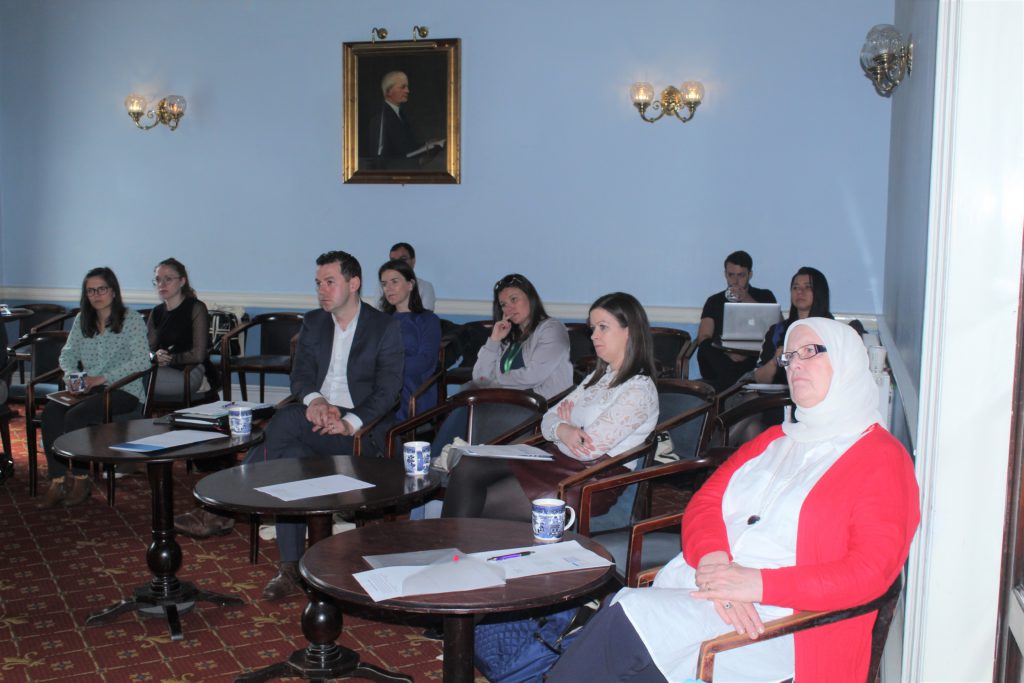 Ireland’s experience of migration has changed radically over the past two decades, with a shift from net emigration to net immigration. The 2016 Census indicates that 535,475 non-Irish nationals, from 200 different nationalities, are now living in Ireland. Of those counted in the 2016 Census, children aged 0 to 14 years comprised 12.5% of the non-Irish nationals counted. The same census also showed that 612,018 Irish residents spoke a language other than Irish or English at home, an increase of 19.1% since 2011. Of these, 363,715 were non-Irish nationals and the top languages spoken were Polish (113,225), Lithuanian (30,502) Romanian (26,645) and Portuguese (16,737).

For the 2019 SIRIUS National Roundtable, we centred our discussion on the topic of linguistic diversity in Irish classrooms. This Roundtable focused on the experiences of bilingual children, the challenges they and teachers face, and the resources available to teachers in Ireland. At present, mainstream primary education system in Ireland currently tends to focus only on the curricular languages English and Irish (Gaelic); heritage language transmission (meaning the transmission of languages spoken by the children’s parent(s)) is usually the responsibility of families, communities and local initiatives. However, the role heritage languages play for a child’s development, for their academic skills as well as their psychosocial wellbeing is recognised in the Irish Primary Language Curriculum, which encourages teachers to enhance children’s skills through their entire linguistic repertoire. The curriculum mentions that teachers should foster linguistic diversity and encourage children to develop skills in all of their languages. This includes home languages/heritage languages. However, teachers are not yet trained with a focus on linguistic diversity.

Linguistic diversity, and its inclusion in policy and training documents in education, is a key issue for migrant students in Ireland. There are huge benefits to encouraging linguistic diversity in classrooms: when pupils feel that their languages and cultures are affirmed, they are more likely to develop a strong sense of identity. Additionally, using heritage languages in the classroom also benefits children who only speak the majority language, as it helps them to gain a better understanding of how other people express themselves, resulting in more openness among pupils, respect and intercultural competence. In general, promoting a variety of languages in primary school education is of benefit to all. Heritage language speakers benefit from using their mother tongue because it eases the transition from home to school and because it values their identity and their experiences outside the school. For children who are new to the majority language, being able to use the heritage language allows them to rely on knowledge they have developed in their early childhood to transfer literacy skills and learning strategies.

Additionally, there is a huge positive effect to children from learning in a diverse environment, which presents a strong opportunity for schools to encourage curiosity and independent learning by taking advantage of all the languages children speak in the school. This is something that is incredibly achievable in a country the size of Ireland; in Finland, which has a similar population size, it’s normal for schools even in rural areas to be multilingual. This is definitely something Ireland could adopt to great effect for the benefit of all pupils.

Research shows that bilingualism does not hinder language development nor academic achievement, and it carries great cognitive benefits. However, currently the recognition of its benefits is not widely accepted among either schools or migrant communities in Ireland. In some cases, migrant parents actively discourage their children from adopting the heritage language. This is especially problematic when the heritage language is not perceived to be a “useful” one. There is the idea that some languages are more useful than others, so both parents and teachers have a bias towards languages that seem to be useful for travel, work, or languages that have a high status like French and Spanish, and often do not give enough value of home languages that are spoken by only a few and are not generally learned as foreign languages (such as Greek or Swahili or Tamil).