YMCAC: drawing conclusions and keeping an eye on the future

Now that a month has passed since the end of the UYD, we will go deeper into Sirius’ training, Young Migrants Can Achieve Change (YMCAC). We will explain the activities of YMCAC, look into the results obtained and see what the future holds for us.

The first day of the YMCAC training was mainly about getting to know each other and the content and terms of the training. This was done through icebreakers and the creation of an expectations tree, which the participants had the opportunity to revise and reflect on. Afterwards, we discussed about the Sustainable Development Goals (SDGs). We explored them by completing a treasure hunt to associate each SDG with its targets. Furthermore, the participants connected the SDGs to the current world, their own lived experiences and environment. The activity was enriching, as it enabled them to gain a better understanding of their importance and the role they play in everybody’s lives. Next, we focused on the EU institutions. The participants learnt about the EU bodies and decision-making process through a quiz and a roleplay game. These activities helped them go deeper into the policy-making mechanism within the EU and the decisive role of the activists in influencing policy through advocacy campaigns.

The second part of the training had a more practical setting. Firstly, the joint session with Young European Federalists (JEF) and European Youth Card Association (EYCA) gave everyone the opportunity to brainstorm about discriminating practices in society and how to overcome them. Thus, we divided the participants into groups and they created their inclusive society, implementing their view on what inclusivity means. Each group focused on a building, for instance the townhall, the school or even the nightclub, and the final result was the idyllic, inclusive town. We then focused on advocacy and the role of activists in the EU decision-making process. We used some interesting tools to explain how the creation of campaigns works, namely a few online and offline campaign examples and a mock campaign (titled Think Pink!). So, the participants created their own mock campaign to go through all of the steps of actually creating an advocacy campaign, both stakeholder and section-wise. They also presented their mock campaigns to each other and exchanged feedback on them. Overall, this was an entertaining moment in which participants put all their imagination into use and came up with the funniest campaigns, and, at the same time, really understood how to make a campaign from scratch. Therefore, in the next session, they started to think about the topic of their real campaign, taking into account the elements learned during the mock campaign session. Lastly, the final days were mainly about drafting the advocacy campaigns and presenting them in order to receive comments from everyone through a World Café activity, which gave the participants the opportunity to express their ideas and help each other.

In conclusion, through the YMCAC training, the participants had the opportunity to learn in depth about the SDGs, the decision-making process of the EU and advocacy. They also drafted their own campaign, which they will continue to implement in their local areas in the coming months. And this is not the end! YMCAC still goes on: Sirius will help the participants with their advocacy campaigns by giving technical and financial support, and the participants will be engaged in their local communities until March. Afterwards, Sirius will draft policy recommendations based on the feedback and results of the campaigns. In addition, the participants will present their work during the final YMCAC event, in April 2023. The event will also host Members of the European Parliament, in the hopes that our young change-makers will bring awareness to topics dear to them and influence the MEPs’ agendas for the 2024 elections.

Stay tuned for more news on the advocacy campaigns and the together.eu platform! 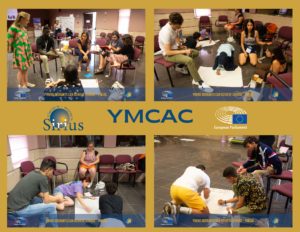 *This content reflects only the author’s view and the European Parliament is not responsible for any use that may be made of the information it contains.